Study Abroad Ain’t What It Used to Be

It’s hard to believe that 20 years ago Ana Gordon Volpi and I were both in the middle of our semester abroad in Israel, she in the hills of Jerusalem at Hebrew University and me soaking up the Mediterranean sun at Tel Aviv University. Right about now I had just showed up at Ana’s apartment after a spring break in Egypt and Jordan and far removed from a shower. 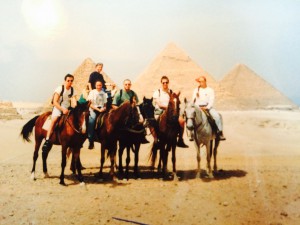 If we’d had Facebook back then, maybe I would still be in touch with some of these people.

What is even more remarkable than the fact that 20 years has passed is how fundamentally different our experiences would have been, primarily due to technology (we’ll park geopolitics in the corner for this post). Hearkening back to the 1995 study abroad experience, we had to do things like:

Great and responsive to work with. Well written content. Matt understood our ideas and was able to explain them clearly in a written form.