Letting Players Coach on the Field and in the Office

Creating an environment where team members get to teach and mentor each other makes the whole team stronger and your job easier.

I have been coaching girls softball for five years. Wrangling 10-15 girls and trying to impart any kind of teaching to them can be a challenge. At a practice, not only do you have small people wielding large metal bats and balls flying everywhere, but you have fun distractions such as rainbows and hawks and remote control airplanes vying for their attention, not to mention the near-constant chattering that one would expect. 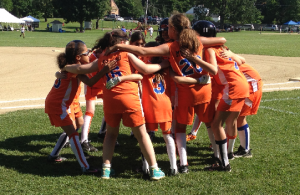 Note the lack of coaches in this picture.

On every team you get a range of experience, skill-levels, athleticism and personalities, which makes every season its own adventure. And with one of me and ten of them, we need to break up into smaller groups to work on different drills to avoid everyone standing around getting bored.

Since I am only able to work with one groups at a time, it creates an opportunity for the girls to assert themselves. While this may sometimes devolve into ball-hogging or tomfoolery or just total chaos, the most rewarding moments are when one or two of the girls step up and begin teaching their teammates, positively correcting them and providing tips and tricks that will inevitably make the team better as a whole.

Aside from improving the team’s level of play, the real value is what it does for the player who takes on this micro-coaching duty. No one told them to do it, but they saw an opportunity to help someone else, provided some hopefully helpful information and can see the result of their effort, whether it is later in that drill or during a game a few weeks later. This teaches them that, even without being granted “official authority,” they can recognize an opportunity for improvement, take some action and better the entire team.

Taking It from the Diamond to the Cube Farm
Things are no different in the office setting. While you probably don’t want your junior direct reports telling you what play to call or who should play which position, fostering a player-coaching environment has several benefits.

You Can’t Do Everything – While it would be fantastic to mentor all of your employees constantly, you probably have some of your own work to do as well. Letting your team members help each other takes away some of that burden and lets you focus on bigger picture items that require your attention.

You Can Observe vs. Direct – Seeing how your employees interact with each other will tell you a lot about both of them. Who has leadership potential? Who takes instructions and feedback well? Who doesn’t? What methods are actually making a difference?

You Can Foster Ownership and Accountability – If your team doesn’t feel like they can really impact the success of the business, what is their motivation for doing what’s best for the company (vs. themselves)? When your employees feel like they can take some initiative to make the team as a whole more effective, their interest in outcomes is increased.

You Aren’t the Only One with Good Ideas – If you have managed to be in a role where you have a team to worry about, someone in the organization thinks you must know what you’re doing. But even if your plans and tactics are outstanding, there’s always room for improvement and often your employees’ peers will have been through similar experiences and found ways to succeed a lot more often and more recently than you have.

I have had the good fortune to be involved with many different types of teams, including engineering, sales, operations and executive teams. Here are a few strategies for making your team members more likely to step-up and start coaching:

Turn Meetings into Coaching Opportunities – I am a big fan of regular team meetings, whether held weekly or biweekly I find invaluable exchanges take place when you put everyone in the same room or on the same conference call and make them stop “doing their jobs” for a little while. But after you have given everyone the important status updates and put out any fires, you want to turn these meetings into player-coaching opportunities. My favorite way of getting this started is to ask members of the team to identify a challenge or situation they ran into recently and, once this scenario is laid out, letting the other team members do the talking. Inevitably, someone else has encountered something similar in the past or has an interesting way to approach it. You can certainly chime in if you have something to add, but this is a chance to let your team members do the talking and help each other.

Pairing People Up in the Field – While most organizations have new employees shadow the vets when they first get hired, after a month or so this practice usually fades away and people are on their own. But by putting two people together on a given task, project or sales call that would normally be handled solo, you create an opportunity for collaboration and sharing that can lead to long-term learnings from their peers.

Redirect Employees to Their Peers – When an employee darkens your door or uses a one-on-one meeting to recount their troubles, try thinking of who else on the team might have already dealt with a similar issue. Put the two of them together (or invite the third person into the meeting) and let them learn from each other, even if you could have just passed on the information yourself.

Give Player-Coaches a Forum to Share – Just as you may have employees telling you their troubles, they are inevitably sharing their successes with you as well. When you spot something others could learn from, suggest a lunch-and-learn or put it on the agenda of your next staff meeting to give them an opportunity to teach the rest of the team.

Always Be on the Lookout for Player-Coachable Moments – You are not always going to hear about things during a meeting, lunches and water breaks often unearth all kinds of nuggets, from sales pitch fails to challenging service calls. Even if it involves people not on your team you can still recommend that people seek out or offer their advice to another regarding a particular situation.

Matt was a great help on my project! Easy to work with, great quality report and really flexible and helpful when I changed the directions mid-stream. I'm grateful he opted to work on my project and highly recommend him!"