9 Lessons Your Management Team Could Steal from SCOTUS 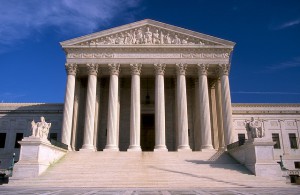 The Supreme Court is often in the news, but the death of Justice Scalia has the most important court in the land is stealing all the headlines and everyone has an opinion. But looking past the immediate drama over who will be the next Supreme Court Justice, there are actually quite a few things corporate management teams could borrow from those folks with the black robes and gavels.

1. Less is More
Not every issue is worthy of the full management team’s time, just like every case isn’t heard by the Supreme Court (they only hear about 1% of the potential cases requested). Save this forum for the big and important things you really want everyone’s opinion on, otherwise let the lower courts—business units, functional teams, etc.—make their own calls.

2. Always Make a Decision
The Supreme Court’s has nine justices. This isn’t because they’re huge baseball fans or because they ran out of chairs, it’s because an odd number of justices means that—barring abstentions or other unusual circumstances—any vote will always result in one side winning and another side losing. This happens even when the vote is 5-4 (which happens quite often), so a verdict is always decreed.

When a management team is closely divided on an issue, there is often a distinct lack of a verdict. This causes decisions to get pushed off or not made at all, creating all sorts of limbo and confusion for the entire company. Management teams are supposed to make the hard calls, even when people aren’t all on the same side of an argument. While there are plenty of times where you need to get more evidence, once you’ve got the data you need, it’s time to make the call and live with the consequences.

3. Preparation Creates Highly Productive Sessions
When the Supreme Court is in session, they knock out case after case in short order. This is not only because they are a smart group of judges, but because everyone involved has done their homework beforehand. Meeting time is limited to discussion of the core issues because everyone already knows the facts when they walk in the room.

4. Give a Voice to Both Sides of the Argument
Every Supreme Court case gives 30 minutes to each side, regardless of their merits or the justices’ predispositions in a given case. Now think about your management meeting and how many times issues are discussed as foregone conclusions. This isn’t a great use of anyone’s time; either an issue shouldn’t be discussed at all because everyone is already in violent agreement, or an issue should be fairly and evenly considered.

5. Let Informed Parties Make Their Case
Management meetings should often be closed-door sessions, as sensitive information, financials and other topics and details are being covered that shouldn’t be shared with everyone in the company. But when a particular topic arises and those normally in the room don’t have all the facts or context, bring in the people that do to present their arguments. You can deliberate once they’re gone, but giving them a chance to explain it themselves and answer questions (instead of relying on a management team proxy) will let the team make a more informed decision.

6. Share Your Schedule
How often are employees “waiting for the management team to decide” which way to proceed? Until this happens, workers are often in limbo, unable to move forward on projects, reply to customers or prioritize their activities. The Supreme Court announces which cases will be heard, and your management team can likewise share if and when they’ll be making a decision on a key issue with downstream impact.

7. Treat Every Member as an Equal
Management teams might only include C-level folks, or you could have Directors and VPs all sitting at the same table. What your title is outside of the room shouldn’t matter that much once you’re in there. If you’re invited to be part of the team, you should be considered a full member with full voting rights. Even though there’s a Chief Justice, his or her vote counts the same as everyone else’s, and the same should apply here. If you don’t trust the people in the room to weigh in on a decision, then they shouldn’t be in the room to begin with. Requiring matching black robes to create an egalitarian vibe is optional.

8. Include Diverse Opinions and Perspectives
While this may not have been the case 50 years ago, the Supreme Court is now a relatively diverse organization. Including Scalia for the time being, three out of nine are women, two of nine are Jewish and two out of nine aren’t white. While still trailing the demographics of our nation, I’m pretty sure most management teams and boards of directors would take those diversity stats in a heartbeat. Not to mention that you have a lot of very strong and differing opinions and political leanings included.

9. It’s OK to Change Your Mind
During the process, justices are known to change their minds on cases based on the compelling opinions authored by other justices. It’s healthy and productive for management team members to be swayed by their peers instead of sticking to their initial gut reactions to the topic at hand. Otherwise, why have a meeting at all?

"Very professional, low maintenance guy to work with. Just give him guidance and he'll come back with exactly what you need."